Looking for a Career at WCSO? - Click here for details 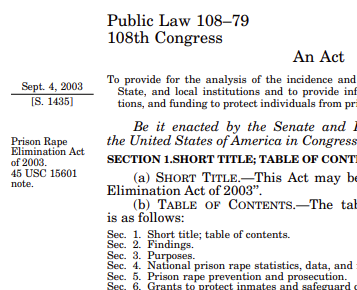 The Prison Rape Elimination Act (PREA), is a federal law enacted in 2003, that was created to eliminate sexual abuse in confinement. In addition to providing federal funding for research, programs, training, and technical assistance to address the issue, the legislation mandated the development of national standards. The National Prison Rape Elimination Commission developed recommended national standards for reducing prison rape.

Sexual abuse can be reported to ANY staff member at any time, either verbally or in writing. The staff will take actions to protect inmates from the assailant and refer them to medical for further treatment and counseling.

The following resources are available for reporting and/or counseling for victims of sexual abuse:

If you wish to report information that an inmate at the Washington County Detention Center has been the victim of sexual abuse by another inmate, or have information about employee sexual misconduct with regard to an inmate, please contact one of the following, either in writing or by phone: